Syros is a beautiful Greek island, a jewel in the Aegean Sea, a beautiful blend of a historical past and a vibrant present. Either in summertime or in winter, visitors are lured by the clear blue waters, the beautiful sandy beaches, the culture and the extreme scenery and share unforgettable experiences throughout the year.

1 Town Hall – The Town Hall of Hermoupolis at Miaoulis Square is one of the largest and most impressive Town Halls in Greece. Built in 1876 under the supervision of Ernst Ziller, this unique building is inspired by 3 different architectural styles. The Tuscan style featured on the 1st floor with the imposing staircase of 15.5 meters in width, the Ionic style found on the 2nd floor and the Corinthian one that can be observed on the towers. The Town Hall also features a marble pediment dedicated to D. Vafiadakis. Other noteworthy elements of the Town Hall are the hanging ladder at the entrance, the bust of D. Vafiadakis, the boardroom and the portraits of former mayors. The Town Hall now houses the courthouse, the land registry, the Archaeological Museum and various other public bodies and municipal services. 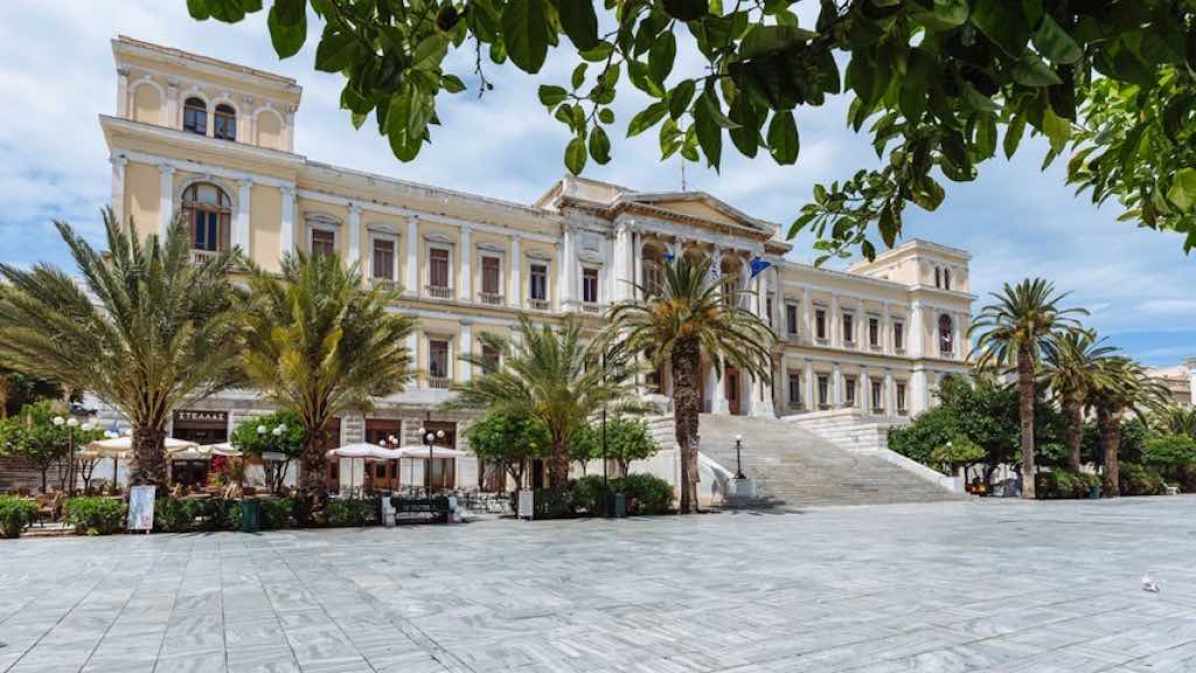 2 Apollon Theatre – The historic Apollon Theatre constitutes an emblem of the island’s cultural heritage. Constructed in 1864 by the Italian architect Pietro Sambo who was inspired by 4 stunning Italian standards including La Scala di Milano, the Apollon Theatre adorns the heart of the capital to this day. It hosts some of the most important cultural events, operas and amazing theatrical performances by local and international theatrical troupes. The Apollon Theatre also houses the Theatre Museum known as “the memory place” which was founded in 2002 and hosts findings of local and other artists who played an important role in the history of this monumental theatre, which is the ultimate alternative for entertainment and unrivaled amusement on the island. 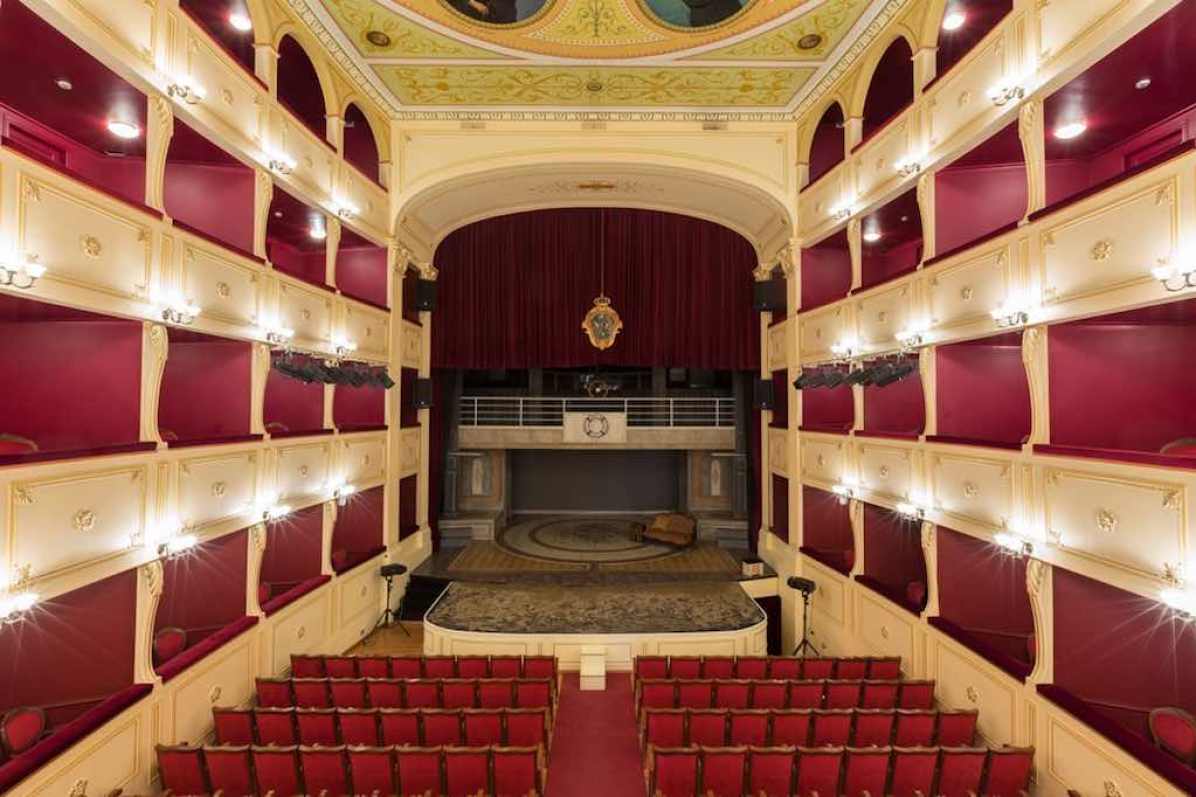 3 Saint Nicholas Cathedral – The Orthodox Cathedral of St. Nicholas is a magnificent Byzantine Church near Miaoulis Square, the construction of which started in 1848 according to the designs of G. Metaxas and the consent of King Otto. The church was finally completed in 1870. Saint Nicholas, patron saint of Hermoupolis, stands out for its lavish interiors and impressive architectural structure, the icon of St. Nicholas that was silver-plated in Moscow, the despotic marble throne, the pulpit and the marble iconostasis that was designed by George Vitalis. This is a two-storied monumental temple with marble bell towers, an imposing marble staircase and marble propylaeums, ionic columns, archaic motifs, arcades, sculptured decorations, grey and blue slates and a unique iconostasis definitely worth seeing. The church’s icons were created by some of the best icon painters of their time while many Greeks from abroad as well as ship owners helped for the construction of the temple. 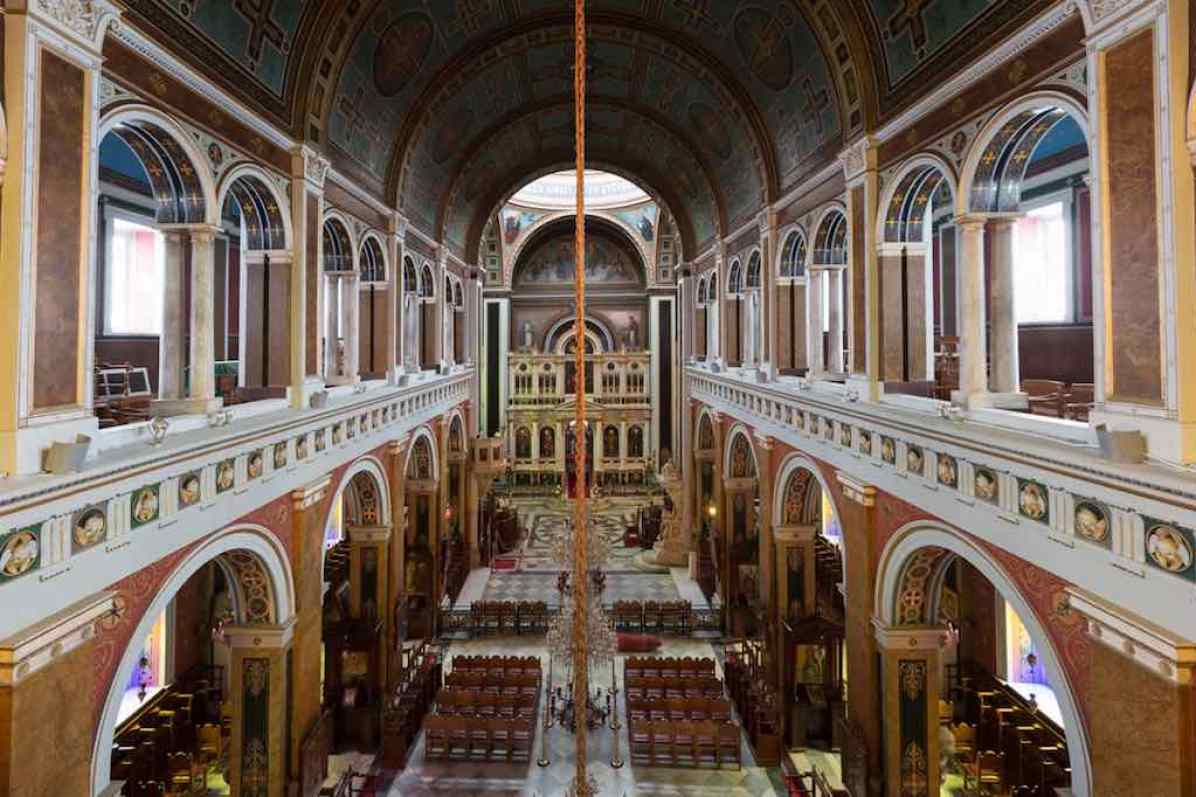 4 Vaporia neighborhood – The high class families of the past built some unique high-ceiling mansions in this neighborhood by the sea, with striking paintings, woodcut doors, marble balconies, wooden floors and unparalleled details. Since the 19th century the district has been named after these incredible residences, known as Vaporia, that seem to hover above the rocks and continues to be renowned as the most prestigious district at the eastern part of Syros. This is a beautiful and picturesque area with a small beach called “Stars” suitable for swimming and relaxation in summertime. 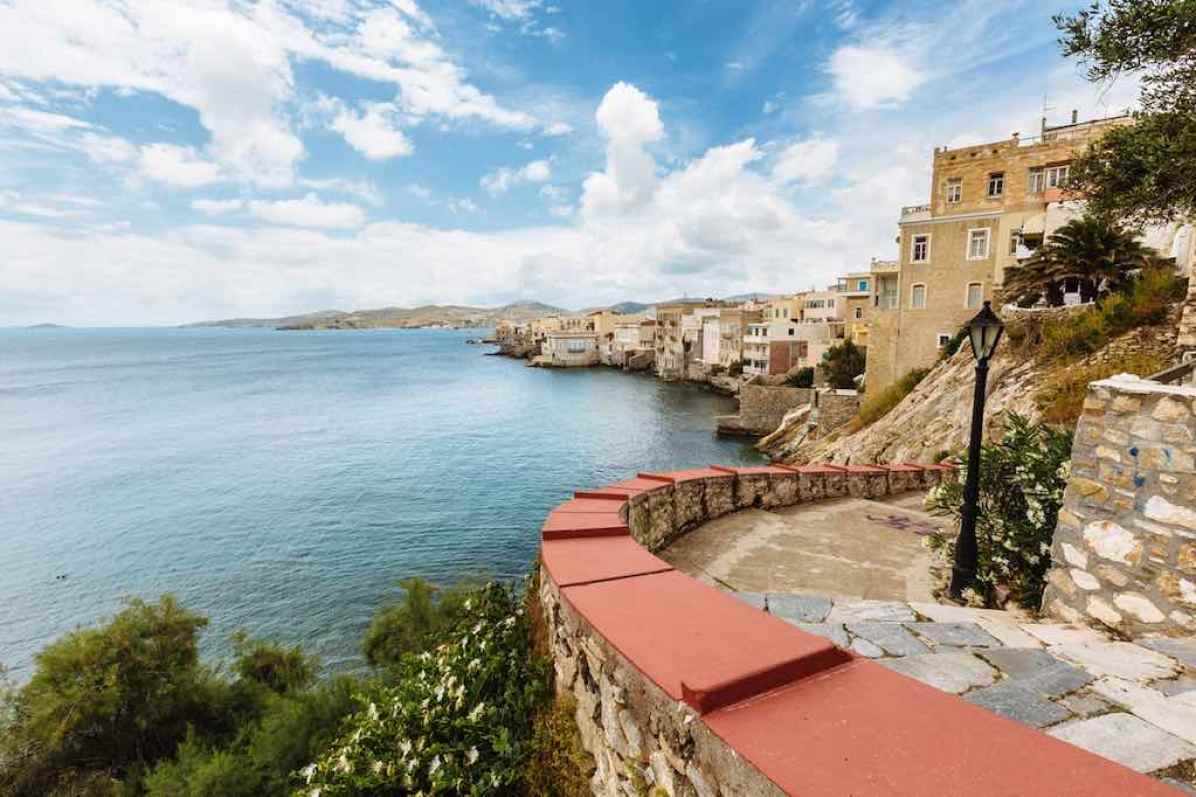 5 Ano Syros – Founded in 1200 by the Venetians, Ano Syros is still inhabited throughout the course of history while maintaining its Catholic and medieval character. A city characterized by countless steps that pass by the white houses and arches at the edge of the hill leading to the top of the settlement where the Catholic Cathedral of Saint George is situated. The town was gradually created, amphitheatrically on the rocks like a natural fortress, so as to keep its residents safe from several attacks while the exterior walls of all the houses formed a natural fort protecting the locals from the raids. The narrow cobblestone streets gave residents the opportunity to hide from the various pirate attacks, while the wooden doors at the entrances of Portara, Epano & Kato Terma, Skalakia and Sabastias completely sealed the city from any invasion. Today it constitutes the island’s historic base, offering a plethora of tourist facilities, restaurants, taverns, cultural landmarks and attractions. 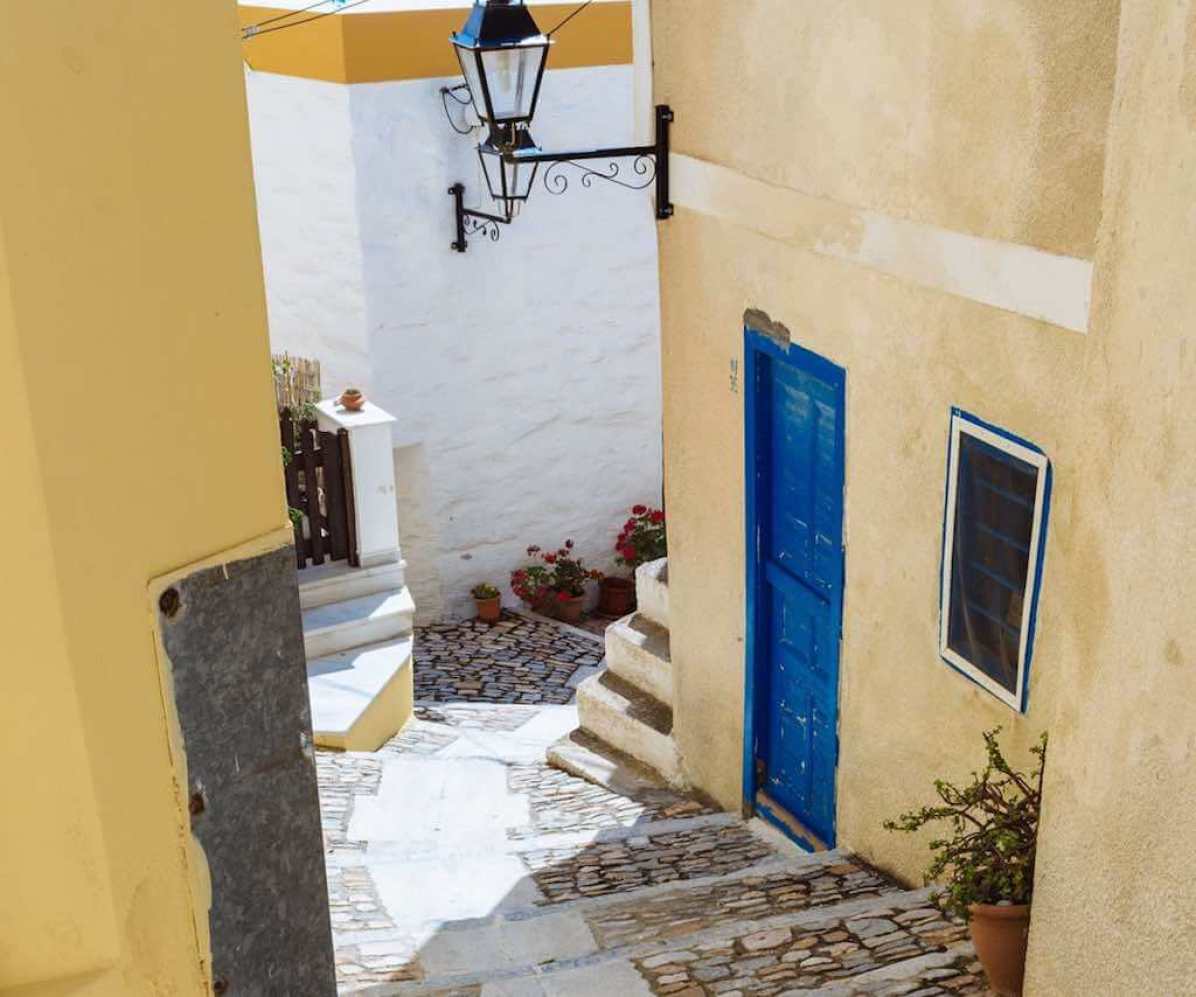 6 Chalandriani and Kastri – Chalandriani is a prehistoric citadel dating back to the 3rd millennium BC. Located on the northeast side of the island, it is one of the most important archaeological sites of the Cyclades. Kastri is a prehistoric settlement from the later years of the Early 2nd Cycladic period, where the excavations brought to light a graveyard with about 600 tombs, as well as ruins of inestimable value, which indicate that ceramic, stone and metalwork had been developed in the area. Various vases, jewellery and household items were also found during the excavations in the region indicating that this was a highly developed settlement. For hiking lovers, the two archaeological sites of Chalandriani and Kastri are linked with a long rough path that is definitely worthwhile as it leads in the mists of time.

7 The Assumption of the Virgin, Orthodox Church – The Assumption of the Virgin is the second oldest church of the island and was built behind the harbor in 1828. It is a three-aisled Basilica with impressive architecture and decoration. The interior is adorned with elements made of wood and marble, while the domes make up a wooden frame that looks like an overturned boat. What stands out is the original icon of the Assumption painted by Dominikos Theotokopoulos (El Greco) in 1562, constituting the Church one of the most important sights on the island. 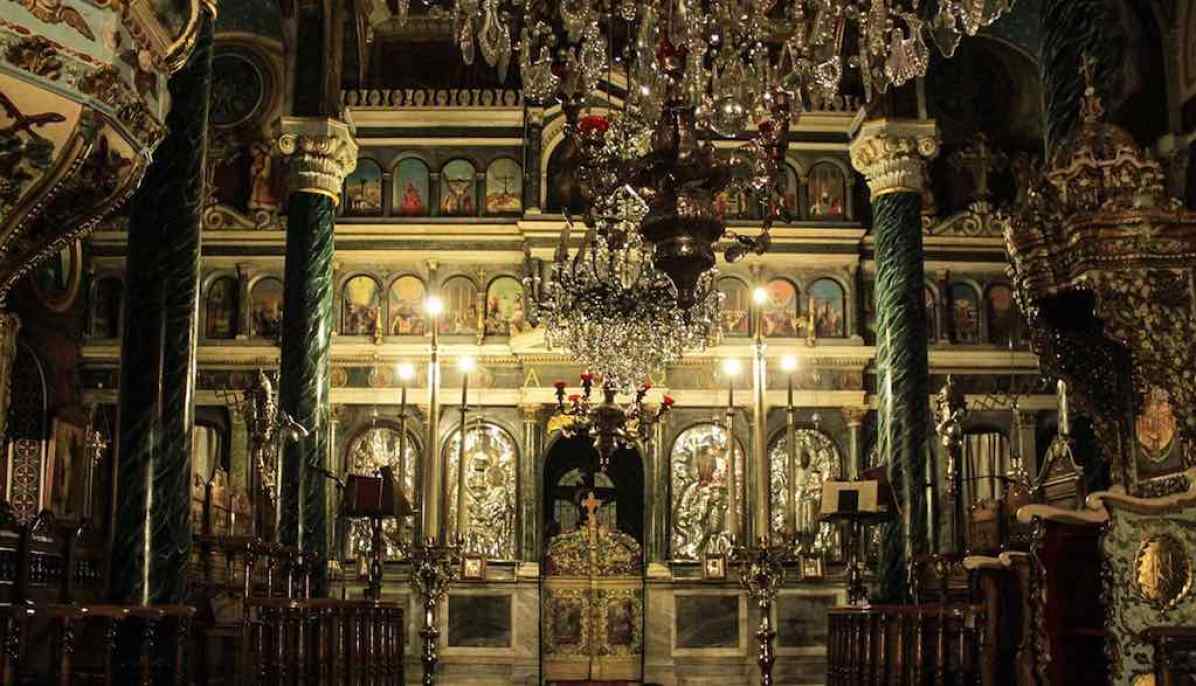 8 Tsiropinas Mansion – Villa Tsiropinas is a true artwork curated by an architect from Burgundy. A stunning Villa in Posseidonia with reception areas, lounges, dining rooms, fireplaces, bedrooms, storage rooms, kitchens and unique frescoes. The Villa is embraced by fragrant gardens and some auxiliary buildings that were mostly used for the parking of wagons at the time. Today, Villa Tsiropinas is a cultural multi-space building that houses several municipal services of Syros-Hermoupolis, while exhibitions, theatrical performances, lectures, conferences and other cultural events are occasionally hosted there. 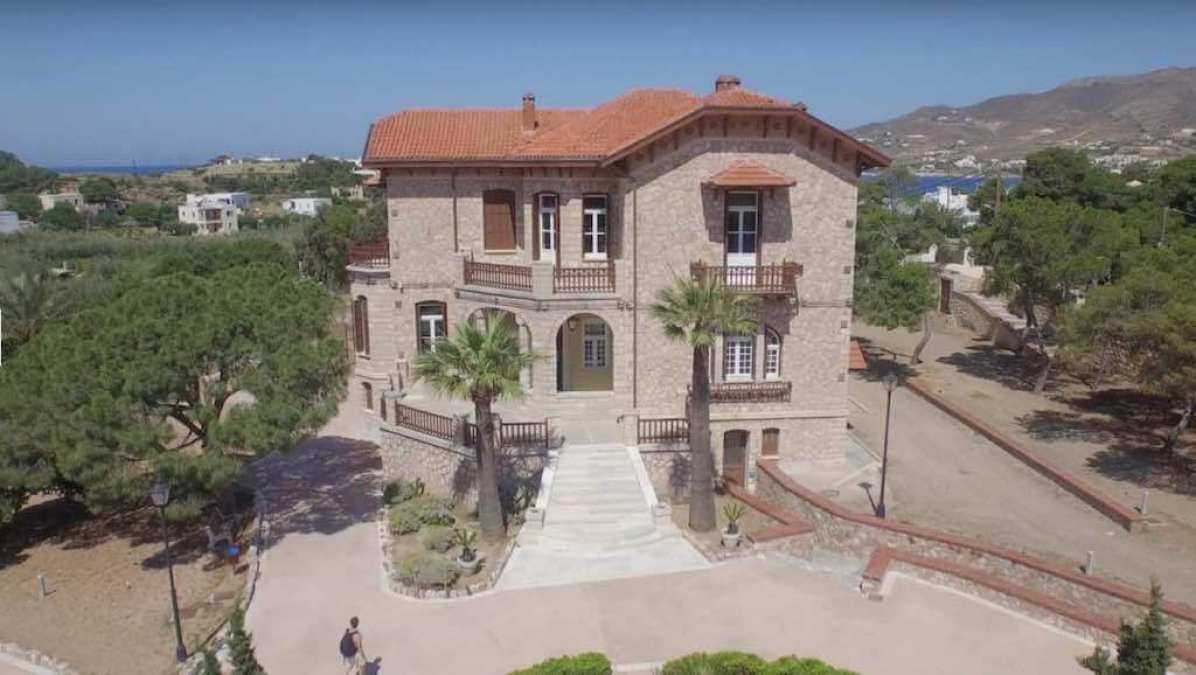 9 Industrial Museum -The Industrial Museum was founded in 2000 by the Centre of Technical Culture, it is housed in 4 industrial buildings of the 19th century, the Kornilakis tannery, the Anerousis pellet factory, the Velissaropoulos weaving mill and the Katsimantis dyeworks opposite the General Hospital of Syros. The Museum hosts a collection of tools, equipment and machinery from the Golden industrial era, from loukoumi workshops to textile, tanning, printing, machinist’s craftsmanship and glass workshops as well as digital audio and visual archives with testimonies from former workers, maps and plans, a three-dimensional representation of industrial buildings and artifacts from the wreck of the Patris steamship. Among the exhibits one can also see the first legendary electric car Enfield 8000 constructed in Greece. 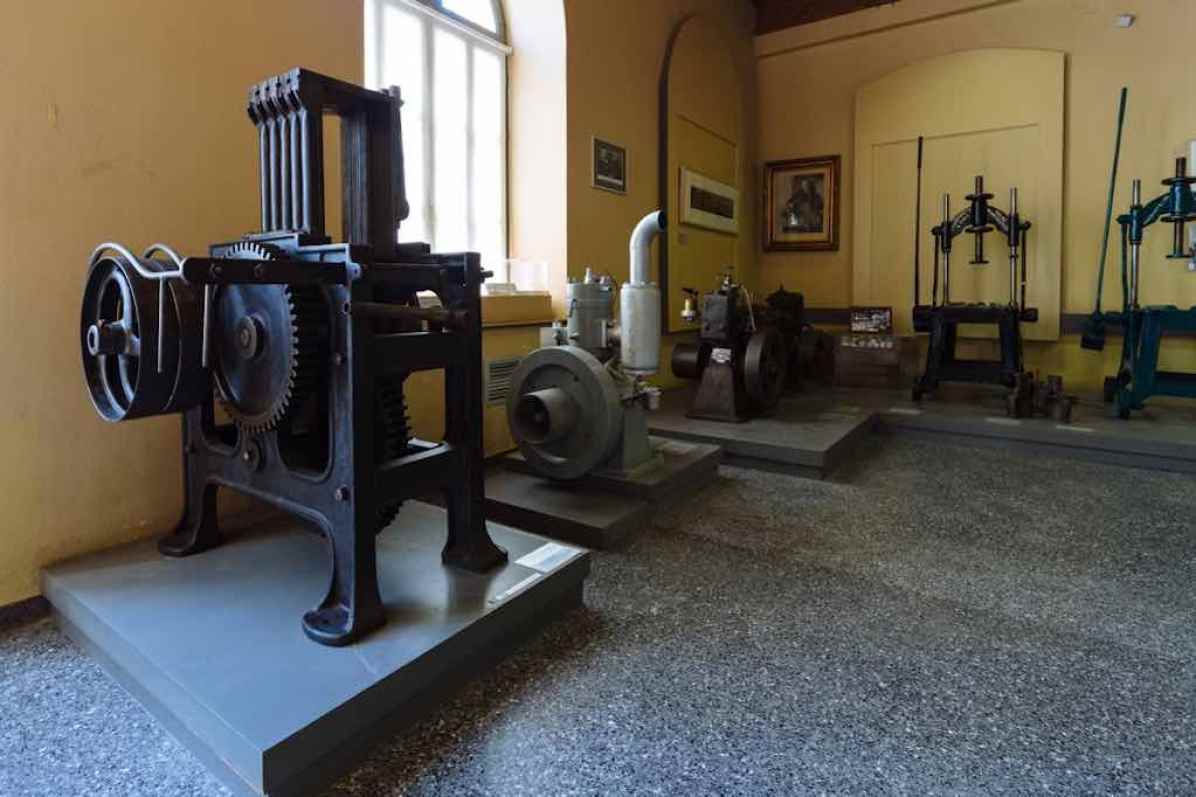 10 Saint Stefanos Chapel – A beautiful and quaint little chapel in the area of Galissas, built among the rocks. The chapel was built by a fisherman who was saved from the tentacles of a large Octopus after praying to the Saint to help him. It is situated 15 minutes from the main beach, from where a small path leads to the chapel. The chapel can also be reached by boat. Saint Stefanos is celebrated twice a year, on 19 August and on 26 December. Hordes of people visit the chapel to attend the liturgy. Following the liturgy all pilgrims are offered “loukoumi”, the sweet local delights, as well as mastic from Chios. 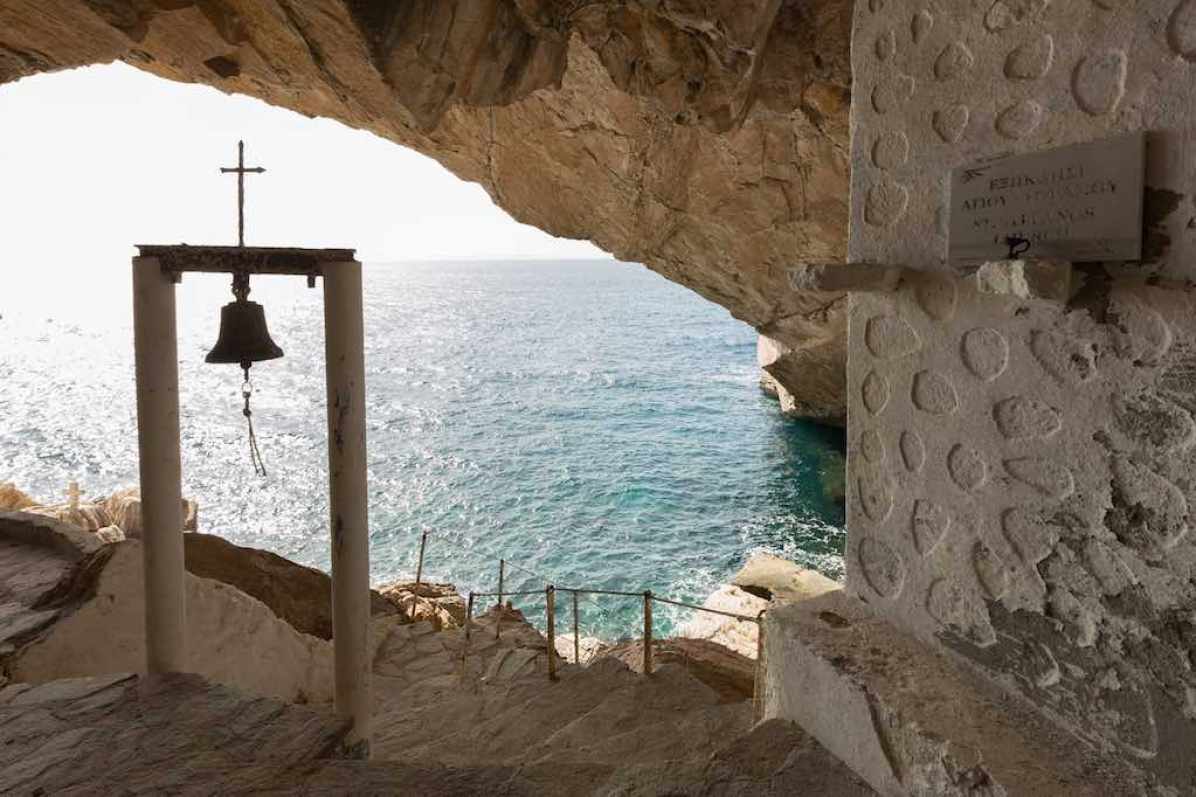